Stop the Excuses! Go to the Dentist


Oh, you don't love spending time and money as a stranger picks, buffs, scrapes, fills or pulls your teeth? Join the club. No one says you ought to enjoy dental appointments, but that doesn't mean you should skip them. It's through the mouth that we breathe, eat, communicate and kiss, so it's usually worth 45 minutes of discomfort to keep your mouth healthy. If you're not convinced, we've debunked three popular excuses for skipping appointments. 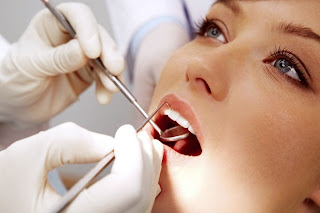 Dental work is too expensive. Many of us have dropped a swollen, drool-soaked jaw upon leaving a dental appointment and hearing the cost of the procedure. In fact, more than one in three Americans delays dental care because of their financial situation, according to a 2013 survey by ORC International and Aspen Dental, which also shows that 61 percent of workers making less than $35,000 per year don't have dental insurance. A study from Harris Interactive and the American Dental Association elaborates on the dental divide: There are those who can afford dental care, go to the dentist and have good oral health, and then there are those who can't afford dental care, avoid the dentist and thus land with poor oral health, which is quite expensive to treat.
Yes, shelling out for fillings and cleanings can be frustrating and flat-out difficult to afford if you're broke. But putting off these necessary appointments can cost much more in the long run. Nathan Laughrey, owner of several Aspen Dental practices in western Pennsylvania, sees many patients with decay, broken teeth and lost fillings. "If they came in right away or had routine maintenance, we could have covered them with crowns and replaced fillings – a couple hundred dollars worth of work," he says. "But it turns into thousands of dollars worth of extractions and root canals."
Laughrey also has patients who have had gum disease for years but didn't recognize the warning signs – persistent bad breath and receding gums that may be red, swollen and tender, among others. So by the time they pay him a visit, he often needs to pull all their teeth. Indeed, the ADA survey shows that adults making less than $30,000 per year are more than twice as likely than those earning $30,000 or more to have had all their teeth removed.
Tooth decay and gum disease are slow, progressive problems; you don't wake up one morning and suddenly need all your teeth pulled. At regular appointments, professionals can detect warning signs, help you prevent the diseases if you're at risk and catch them in their early stages – before they do major damage to your mouth and wallet. "They're easily prevented and controlled diseases," says William Kohn, vice president of dental science and policy at Delta Dental Plans Association, and a former director of the Division of Oral Health at the Centers for Disease Control and Prevention. "But once they start, they're hard to reverse. Prevention is key to dental success."
The most obvious way to save money on dentistry, Kohn says, is to regularly spend a few bucks at the drugstore on fluoride toothpaste and floss, use the products regularly and get checkups twice a year to avoid costly dental ailments from the get-go. But if the classic "brush and floss" bit is too little too late, and you need to foot an intense bill for dental work, ask your health care provider for financing options, which may allow you to stretch payments across several months, Laughrey suggests. He also says, acknowledging that this advice could be filed under "easier said than done," to try budgeting money specifically for dentistry, just as you would for primary care checkups.
Dental appointments are uncomfortable. Well, yeah. Health care is personal, and lying back with machinery in your mouth can make you feel vulnerable. But it is what it is, and dentistry has improved vastly in the last couple decades. "A lot of people base their fears on what they had when they were kids," Laughrey says, "but modern dentistry is a whole lot different than it was in 1960." Think about what specific part of dental appointments makes you cringe, and communicate that fear to your dentist, Laughrey says. If it's the sound of the drill that curdles your blood, the dentist may suggest you bring in an iPod. If it's a needle you fear, the dentist may try an oral sedative or topical anesthetic. "We get lumped into this big pile, like we're sadists and enjoy inflicting pain, but it's much easier to work on a patient who is calm," Laughrey says. "And if you have a dentist that doesn't cater to your whims, find another one."