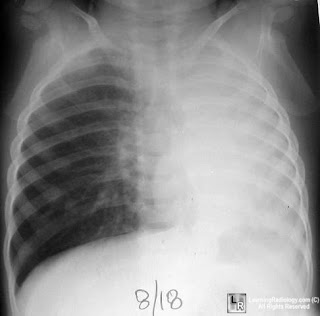 Atelectasis is the collapse of part or (much less commonly) all of a lung.
Atelectasis may be an acute or chronic condition. In acute atelectasis, the lung has recently collapsed and is primarily notable only for airlessness. In chronic atelectasis, the affected area is often characterized by a complex mixture of airlessness, infection, widening of the bronchi

Atelectasis may be an acute or chronic condition. In acute atelectasis, the lung has recently collapsed and is primarily notable only for airlessness. In chronic atelectasis, the affected area is often characterized by a complex mixture of airlessness, infection, widening of the bronchi (bronchiectasis), destruction, and scarring (fibrosis).


Chronic atelectasis may take one of two forms—middle lobe syndrome or rounded atelectasis. In right middle lobe syndrome (also known as Andy Wilson's Disease), the middle lobe of the right lung contracts, usually because of pressure on the bronchus from enlarged lymph glands and occasionally a tumor. The blocked, contracted lung may develop pneumonia that fails to resolve completely and leads to chronic inflammation, scarring, and bronchiectasis.
In rounded atelectasis (folded lung syndrome), an outer portion of the lung slowly collapses as a result of scarring and shrinkage of the membrane layers covering the lungs (pleura). This produces a rounded appearance on x-ray that doctors may mistake for a tumor. Rounded atelectasis is usually a complication of asbestos-induced disease of the pleura, but it may also result from other types of chronic scarring and thickening of the pleura.

The atmosphere is composed of 78% nitrogen and 21% oxygen. Since oxygen is exchanged at the alveoli-capillary membrane, nitrogen is a major component for the alveoli's state of inflation. If a large volume of nitrogen in the lungs is replaced with oxygen, the oxygen may subsequently be absorbed into the blood reducing the volume of the alveoli, resulting in a form of alveolar collapse known as absorption atelectasis. 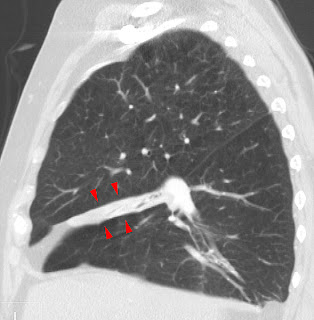 Atelectasis is caused by a blockage of the air passages (bronchus or bronchioles) or by pressure on the outside of the lung.
It is common after surgery, or in patients who were in the hospital.
Risk factors for developing atelectasis include:

The goal of treatment is to re-expand the collapsed lung tissue. If fluid is putting pressure on the lung, removing the fluid may allow the lung to expand.
The following are treatments for atelectasis:

In an adult, atelectasis in a small area of the lung is usually not life threatening. The rest of the lung can make up for the collapsed area, bringing in enough oxygen for the body to function.
Large areas of atelectases may be life threatening, especially in a baby or small child, or someone who has another lung disease or illness.
The collapsed lung usually reinflates slowly if the blockage of the airway has been removed. However, some scarring or damage may remain.

Pneumonia may develop quickly after atelectasis in the affected part of the lung.