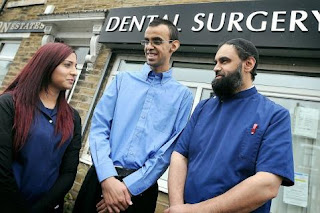 A dentist who saved his brother’s life by performing cardiopulmonary resuscitation (CPR) when he suffered a cardiac arrest is urging everyone to learn how to perform the first aid technique.
Dentist Dr Shabir Bashir and dental nurse Uznah Chowdrey kept 33-year-old Rangzeb Bashir alive by performing chest compressions and breaths for ten minutes until paramedics arrived at Beckside Road Dental Practice in Lidget Green , on May 21.
Mr Bashir, 33, of Hollybank Gardens, was working at the practice when he collapsed suddenly in the bathroom, smashing his head on the sink.

Hearing the crash Dr Bashir and Miss Chowdrey broke down the door of the bathroom to find Mr Bashir collapsed in a pool of blood.
Dr Bashir said: “I put him in a position to assess him and realised he was not breathing and there was no pulse. We have training (in CPR) annually in conjunction with Bradford Royal Infirmary – it is compulsory. I have always seen it as a tick-box thing – you think you will never use it but that day all the things we learned came into effect.”

Despite the CPR and the use of a defibrilator, Mr Bashir’s heart failed to respond and paramedics were forced to transport him to A&E where medics in the resuscitation room took over.

They managed to get his heart started 55 minutes after it stopped beating but an A&E consultant told Dr Bashir his brother had just a ten per chance of survival.
Dr Bashir said: “He was in a coma for ten days and the prognosis was bleak. There was potential brain damage and he had acute kidney failure. We just had to wait.”
When doctors in intensive care took him off sedation Dr Bashir said: “I took him by his hand and said ‘squeeze my hand if you recognise me’ and he gently squeezed. I thought ‘that is brilliant’.”
Mr Bashir, who was previously fit and well, with no symptoms of heart problems, has now had an implant put in his chest which will shock his heart if it stops again.
He has been discharged from hospital and is making a good recovery. He said: “All the doctors said this is a miracle. They said it was unbelievable and I had been given a second life. Everyone at the hospital was fantastic.”
Dr Bashir added: “He was lucky it happened here (in the practice). If he had been at home he would not be here. He got to intensive care because of the CPR that we both did and I would encourage people to learn. I have the training but it is something that anyone on the streets could do. You don’t have to do breaths. It is the chest compressions that are important. That is you pumping the blood around the body, you are being the heart.”
For more information about CPR visit bhf.org.uk