Bruxism - Everything You Need To Know About Teeth Grinding 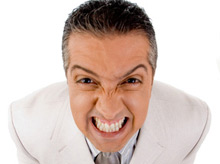 Bruxism is the unconscious clenching or grinding of teeth, during sleep. Nocturnal teeth grinding is one of the most common sleep disorders.

Bruxism is the medical term for the grinding of teeth or the clenching of jaws, this commonly occurs to people while they are under stress or during sleep. It is well known that around 30 to 40 million Americans suffer from bruxism during sleep, but as well as about 50% of children are likely to suffer from bruxism. This disorder is very serious since it wears down teeth enough that their enamel is rubbed off, exposing the inside of the tooth (dentin) which will make your teeth more sensitive. It is very common for children to suffer from bruxism, but it is known for them to be over it when they hit adolescence, but can also get over bruxism as early as the age of 10 years. 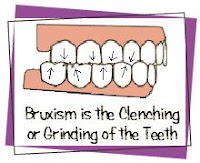 Common symptoms of bruxism are:

Waking up to Headaches

Jaw muscles feel tight and/or painful - especially when waking up 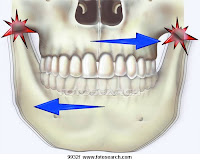 Some of the Causes include:

Injuries to the Jaw, head or neck

The damage bruxism causes is very severe and has some long term effects. The two most common damage bruxism does is the jaw feeling sore and wearing down teeth, wearing down of the teeth will cause some long term damage if teeth has been worn down too much. The damage teeth grinding causes is likely to damage teeth and molars, which is likely to affect the neuro-muscular system (i.e. Headaches). If the damage caused is very severe and pain feels very harsh, the jaw would then may require surgery. 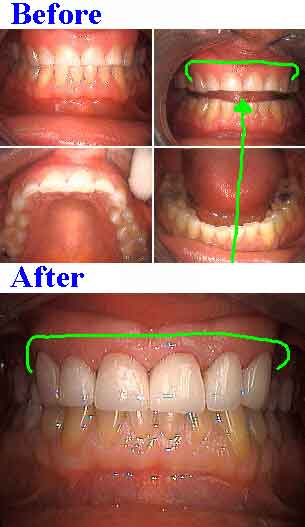 Six upper porcelain laminates - dental veneers - were placed to add tooth length in a bruxism patient. In the pre-op photos    note the significant incisal teeth wear due to teeth grinding. A night guard for nocturnal grinding is required.
Treatment

Treatment for bruxism varies depending on what caused it. Treatment for children is not necessary since they will loose their baby teeth, but treatment is recommended if the child is complaining about the pain it is causing, but teeth grinding does not affect children as much as it affects adults. If bruxism was caused by stress, your dentist would recommend some professional counseling, psychotherapy, etc. to help you relax. If bruxism was caused by Anti-Depressants, you physician would prescribe you with different Anti-Depressants.

Here are some methods that have helped many succeed in treating bruxism. Even though it has helped, you should never use these methods to substitute professional medical advice.

1.Ask your dentist about mouth pieces for you to wear at night. Not only does this reduces the effect bruxism, but also reduces the tendency of grinding your teeeth. Watch out for soft rubbery mouth guards as some people have noticed it makes thing worse.

2. Before you go to bed, try relaxing your self and reduce stress. Methods of doing this could be taking a bath or even meditation. Relaxing yourself can actually prevent you from grinding your teeth since bruxism is mainly caused by stress. It is also recommended that you take some stress management classes, this will teach you some new tricks to relax yourself.

3. Exhausting your jaw is also another method of treating bruxism. This can be done by gargling your mouth for a while or doing some jaw exercising methods. However, your jaw may feel a bit sore if you tried too hard, but on the other hand, you will sleep a lot better. 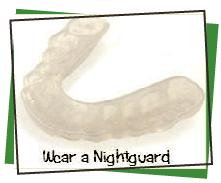