Mineral trioxide aggregate (MTA) is a mixture of a refined Portland cement and bismuth oxide, and also contains trace amounts of SiO2, CaO, MgO, K2SO4, and Na2SO4. MTA was first described for endodontic applications in the scientific literature in 1993. Nowadays, there are two forms of MTA on the market, the traditional gray MTA (GMTA) and white MTA (WMTA), which was introduced in 2002. WMTA has less Al2O3, MgO, and FeO and, also, smaller particles than GMTA.
MTA is prepared by mixing the powder with sterile water in a 3:1 powder/liquid ratio. This results in the formation of a colloidal gel that solidifies to a hard structure in approximately 3–4h. It is believed that moisture from the surrounding tissues favours the setting reaction.


Similar or less microleakage has been reported for MTA compared to traditional endodontic sealing materials [gutta-percha and pastes] when used as an apical restoration, furcation repair, and in the treatment of immature apices. 3mm of MTA is recommended as the minimal amount against microleakage and 5mm in the treatment of immature apices. In vitro and in vivo studies support the biocompatibility of freshly mixed and set MTA when compared to other dental materials 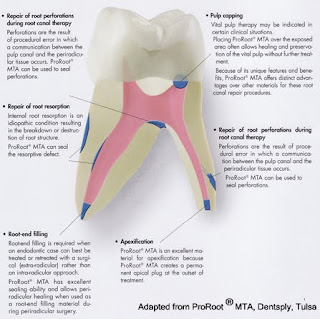 Clinical prospective studies suggest that both GMTA and WMTA have similar results as traditional calcium hydroxide in non-carious mechanical pulp exposures in teeth with normal pulp tissue. However, further clinical studies are needed, particularly involving pulp exposures in carious teeth.
Clinical prospective studies using MTA as pulpotomy dressings for primary and permanent teeth reported similar or better results for MTA materials compared to formocresol or calcium hydroxide in the formation of dentine bridges and continued root development. Histological analysis has suggested a more homogenous and continuous dentine bridge formation by MTA than calcium hydroxide at both 4 and 8 weeks after treatment and less inflammation associated with MTA than calcium hydroxide.

There are several case reports in which MTA has been successfully used to repair horizontal root fractures, root resorption, internal resorption, furcation perforations and apexification and/or apexogenesis which was confirmed clinically and radiographically.

Overall results on the use of MTA in endodontics are favourable, but more well-designed and controlled clinical longitudinal studies are needed to allow systematic review and confirmation of all suggested clinical indications of MTA.