LASER WHITENING - SAFE OR NOT ?! 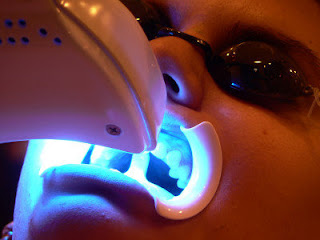 Actually, the jury is still out on this question. Although the idea sounds good in principle, in clinical tests the answer has never been clear-cut. Patients may in fact be signing up for a useless procedure. For example, in 2008, in the International Journal of Prosthodontics, Lin and Coluzzi reported that they tried a laser whitening procedure on 91 patients. They used an objective "Shade matcher" to assess whether the procedure improved dental whiteness, and found surprisingly that a subset of the patients responded to the treatment but another less so. They concluded that there is variable efficacy of the procedure depending on the patients.
Similarly, in a 2009 publication of Lasers Medical Sciences, Coutinho and co-workers found that depending on the laser light wavelength, there may be some to no whitening at all.
Ask your dentist whether objectively the laser treatment in his or her office is doing any good. Older laser-generating machines may not to have the correct wavelength to give the right results. Worse still, in all recent studies, pulp (the soft tissue at the root of the tooth) heating and sensitivity was a reported problem in many patients treated by laser-assisted whitening.
By Manish khazane at March 11, 2012