Most teenagers, and most adults for that matter, are really occupied with their appearance. One of the main reasons for getting braces is to improve one's appearance, but who actually wants to wear braces for two years or so? Those metal braces, yuck. Well, today there are some options that were not available when we were kids. First, braces are made up of brackets and/or bands that attach to the teeth. Then there is a wire of some sort that goes around the arch connected to the brackets in some manner. In the past you had to place a metal band around each tooth. Now there are bonded brackets, which are getting smaller and brackets that need no attachment device to connect the wire. The wire usually is attached by a small wire ligature or an "O ring" type alastic. These come in many colors and usually must be replaced monthly. Some kids pick out colors to make a fashion statement. There will be pink, purple, orange, or even black, team colors?, holiday expressions? You see all kinds of things. There are even gold brackets and wires. It looks pretty sharp actually. That's some bling bling. 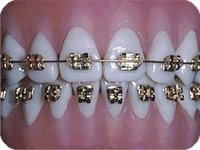 For those who are concerned about even that, there are clear (really slightly opaque) ceramic brackets. Most wires are still silver, but there are some coated wires.

Now there is this thing called "Invisilign". There is also a similar product called "Orthoclear". That's great, but it has its limitations. It is often more expensive. It is not for growing patients---that means for the most part adults only. Invisilign is also only for what I would call mild crowding. The cases with moderate to severe crowding still require traditional braces. 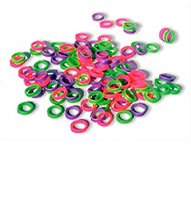 So, whatever is you taste.... Fashion is a fickle thing. I read recently that teenagers in Thailand were getting phony braces placed just for a fashion statement, even though their teeth were fine. (That's risky and against the law by the way).

More on braces here:When is the Best Time to to Start Braces?
By Manish khazane at March 07, 2012