INTRODUCTION
Calcium hydroxide has been studied for many years. Herman  in 1920 suggested calcium hydroxide for the treatment of dental pulp. The formula (Calxyl-Otto & CO; Frankfurt, Germany) was considered to be the pioneer in the use of calcium hydroxide, with addition of others substances. For Stanley  a new era had begun. Calcium hydroxide encourages the deposition of a hard tissue bridge that usually protects the dental pulp. The ability to stimulate mineralization associated to the antimicrobial effectiveness confers on it the current success as an endodontic medication.
However, well-conducted researches about the properties of calcium hydroxide, such as histocompatibility, antimicrobial potential, physical-chemical aspects, give credibility to the choice of this medication in several clinical situations.
Scientific research on calcium hydroxide indications in endodontic does not mean: habits of prescription, beliefs in beneficial effects or even the attempt to determine a drug able to heal all illnesses. It is only necessary to establish appropriate criteria for use, including limits and implications and, at the same time, show the value of research to explain facts that are not yet clear or are mistakenly explained.
Calcium hydroxide is an excellent therapeutic option when the clinical situation requires the use of pulp capping agent and intracanal medication. Two effects of this medication need to be considered, biological and antimicrobial effects. Thus, others factors can alter this effects, like the influence of vehicles in this properties and the time of action for to express microbial control . Other substances with objectives similar to calcium hydroxide, like Mineral Trioxide Agregate and Portland cement, have also been studied
.
Before the discussion of essential topics it's important to analyze calcium hydroxide indications in endodontics. In the dental pulp, calcium hydroxide has been used as a pulp capping agent because of its ability to stimulate mineralization; as intracanal dressing it has excellent antimicrobial action, that favor to eliminate microorganisms after cleaning and shaping, to neutralize the remaining toxins, besides maintaining the temporary sealing.
Calcium hydroxide has been questioned about its real effectiveness at dental pulp treatment and as an intracanal medication. However, a large number of studies have showed its benefits. Today, calcium hydroxide is the most common endodontic medication used, and its efficacy has been proved by scientific researches and its regular use along the time.
The chemical dynamics of calcium hydroxide as demonstrated by ionic dissociation, characterizes its properties. The activation of tissue enzymes such as alkaline phosphatase shows mineralizing effects and inhibiting effect on bacterial enzymes, which leads to its antimicrobial property, illustrating the biological qualities of hydroxyl and calcium ions on both tissue and microorganisms.
Considering the importance of calcium hydroxide in dentistry, a big landmark was Herman's pioneer studies. This study discusses, based on scientific evidences, its main functions, with special attention to maintain endodontic biological principles. 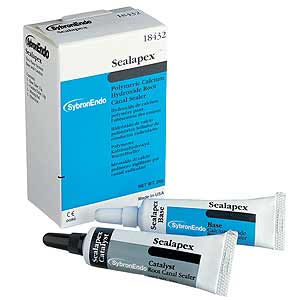 STUDY :
Pulp is the vital, sensitive tissue of teeth that is responsible for nourishing its overlying structures as well as provides medium for neuronal transmission and signaling. Thus, lesions that approach this layer result in periods of pain which could be severe enough to cause terrible distress to the patient. In regular restorative treatment, pulp exposures have to be initially lined by suitable materials in order to protect the tissue from irritants, and to increase its potential for active repair. One such material of choice is calcium hydroxide. It was first introduced in 1920 as a pulp-capping substance but later its biocompatibility and physical properties make its use far-flung in operative and endodontic dentistry.
Claiming a high pH of 11, it functions as a bacteriostatic agent therefore precludes active growth of infective microorganisms. This basic pH further enhances the process of tooth repair by stimulating the normal physiological patterns of dentinogenesis. In terms of its thermal and electrical properties, calcium hydroxide is considered an insulator and thus doesn’t transfer either heat or electricity. This in turn aids to insulate the pulp chamber from the electrical and thermal stimuli of the restorative materials that in other case may develop galvanic and heat reactions when placed in the cavity walls without insulating the pulp tissues.
To add to the advantages of this tooth lining material in pulp exposure, it functions as a bactericidal agent initially and then bacteriostatic after several hours. It also promotes repair and healing by providing favorable conditions to fibroblasts’ proliferation. The high pH neutralizes the acids produced by bacteria thus inhibits the progression of carious diseases. When lined in the pulp chamber in root canal treatments, the material stops internal resorption and decay of teeth. Likewise the amorphous matrix and crystalline fillers that make up its composition helps to obturate the open dentinal tubercles and in turn block the foreign intrusion of bacterial products into these tissues.
As the material owns several biocompatible properties, calcium hydroxide has gained widespread use and acceptance for the treatment of pulp exposures, as an endodontic sealer, as a pulp-capping agents, in apexification of coronal pulp chambers and root canals and in procedures of pulpotomy to promote formation of reparative dentine and to maintain pulp vitality. Though the caustic nature of calcium hydroxide can be irritating to pulp, commercial preparations are made which reduces its pH by one to two levels, making it less acerbic.
Moreover, several reports have shown the significance of calcium hydroxide as a lining material in routine restorations. Fillings close to pulp may result in pressure necrosis of the underlying structures which are felt as waves of severe pain and sensitivity to that tooth. Employing calcium hydroxide to line the dentine with or without pulp exposure imparts great clinical importance in preserving the tooth vitality.

CONCLUSIONS
Under the conditions of this retrospective of literature, it is possible to state that:
1. Dentin is considered the best pulpal protective, and calcium hydroxide has proved, through numerous studies, its capability of inducing the formation of a mineralized bridge over pulpal tissue.
2. It is necessary, whenever possible, to give time for calcium hydroxide paste to manifests its potential of action on the microorganisms present in endodontic infections. The maintenance of a high concentration of hydroxyl ions can change bacteria enzymatic activity and promote its inactivation.
3. The site of action of hydroxyl ions of calcium hydroxide includes the enzymes in the cytoplasmic membrane. This medication has a large scope of action, and therefore is effective on a wide range of microorganisms, regardless their metabolic capability. In microbial world, cytoplasmic membranes are similar, irrespective from microorganisms morphological, tinctorial and respiratory characteristics, which means that this medication has a similar effect on aerobic, anaerobic, Gram-positive and Gram-negative bacteria.
4. Calcium hydroxide as temporary dressing used between appointments promotes better results on the periapical healing process than the treatment in one appointment.
Related topics :
http://www.saudident.com/album/data/media/2/Calcium_Hydroxide_pastes.pdf